I have had an incredible month since my Trackman unit arrived at the beginning of May and I wanted to share a few success stories.  I knew Trackman was incredible technology, and after using it for the past month I will admit that it is way better than I thought.  To be able to accurately show students what they are doing at the moment of impact is unbelievably helpful.  My thoughts on using Trackman are simple:  I am going to make changes that are going to directly improve your contact and your ball flight.  I have had more than a few cases where the student makes the change and improves in the very next swing.  There are times when more than a few adjustments are necessary to improve ball flight but here are a few that have been quick and dramatic.

A few weeks ago I worked with Justin Smith, a good collegiate player that was struggling a little bit with his swing.  We worked on his irons for a little while and improved his contact and ball flight.  We then looked at the driver and I put some dry erase marker on his driver face to see where he was contacting the ball.  After 3 shots we looked at the numbers and 2 things were very clear:  On average, he was launching the ball low and spinning it too much.  We looked at the face and he was striking the ball below the center of the clubface.  This will cause the ball to launch lower due to the curve of the driver face from top to bottom (also known as roll), and spin more due the vertical gear effect of a strike below the center of the face.  We made a simple change of teeing the ball up about 1 inch and with the next 6 swings he gained almost 20 yards of carry distance and 17 yards of overall distance on average. 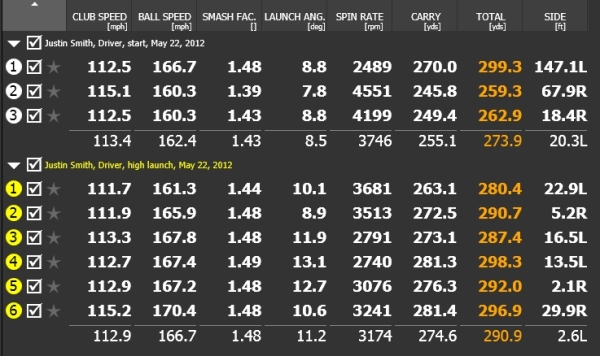 I have been working with Jesse Hord from the Cricket Club for a couple of months and we are working on getting rid of his over the top swing and outside – in swing path.   We worked on starting slow to get the proper motion.  Near the end of the lesson I put a few swings on Trackman and saw that his path was much better.  In some cases his path was moving out to the right, which is a huge improvement considering how far left his path was when he started.  After reviewing the shots, I noticed that the swing speed was still a little bit slow and gave Jesse a quick tip to speed his hands up through impact.  I put the next swing on Trackman to see what the difference was and it was amazing.   His clubhead speed went up 11 miles per hour and he carried it 40 yards longer than the average of his 4 previous shots and 25 yards longer than when he started the lesson.

Story #3  Why is the ball curving?

Kyle (who works at the Cricket Club) came up to the range to try out his new Titleist AP2 irons the other day – the same irons that I play.  I wanted to see how he was hitting them and noticed that he was over-drawing every shot and they were finishing way to the left of the target.  He noticed the Trackman and asked about it so I asked him to hit a few shots.  He hit 5 balls and we looked at the numbers.  He is a hockey player and generates a lot of clubhead speed, but his path is going too far out to the right.  I showed him the numbers and explained that if he swings a little bit more to the left that his ball would curve less.  It is tough for some people who hit the ball to the left to understand that they need to swing to the left.  If you have Kyle’s shot pattern, you need to do just that to get the ball to curve less and finish closer to the target.  His next 5 shots were recorded on Trackman and he cut his dispersion by 50%.  His average shot was now 14.5 ft from the target compared to 31.3 ft.  Easy game when you know exactly why your ball is doing what it is doing and what you have to do to fix it.

I am looking forward to many more of these stories and sharing them with you.